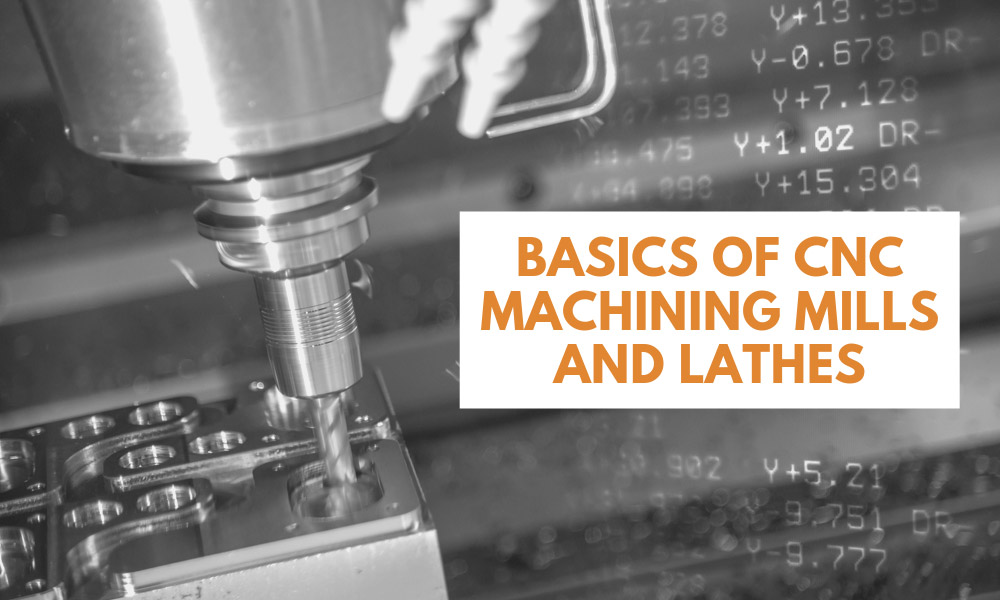 Most modern manufacturers have both CNC milling machines and machine lathes. Both machines follow the same basic machining principle of subtractive machining. Subtractive machining means you begin with a piece of raw material and subtract material from the piece until it meets the desired specifications. How the part arrives at that predetermined shape is the biggest difference between mills and lathes. The two machines perform similar work, but in different ways. Read about the history and basics of CNC machining mills and lathes.

Invention and innovation drive industry and technology. Companies always try to create the next big thing and produce it more efficiently. Technology evolves out of necessity; it does not just appear. You could trace back technological developments and precursors to the dawn of man, if you felt so inclined. The growth of a machine or technology is like a massive family tree with roots that reach back hundreds of years and generations. Without prior experiments and inventions, what’s new could not exist—machine tools are no different.

Frank Sullen and John Parsons receive the credit for creating Numerical Machining (NC). Parsons worked with Parsons Corp. in Traverse City, Michigan in the early 1940s. In 1942, a peer told him that helicopters would be the next big thing, and he set out to get a piece of the action. He contacted Sikorsky Aircraft to see about some work, and he landed a contract with them to build the wooden stringers in the rotor blades for their helicopter. Production began, and soon a problem arose that led Parsons to suggest making the stringers from stamped metal rather than wood. To do this, it would require replacing the wooden jig with a metal cutting tool made from steel. Such a device wouldn’t be easy to make, so Parsons sought out Frank Sullen, the head of the Propeller Lab Rotary Wing Branch. Sullen’s brother worked at Curtis Wright Propeller and told him they used punched card calculators for engineering calculations. Sullen took this idea and made a program with large tables of numbers that then went to the machining floor. One operator read the numbers to two other operators; one stayed on the Y axis and one stayed on the X axis. For each pair of numbers, the operators would move the cutting head to the specific spot, lower the tool and make the cut. This operation is where the phrase “by the numbers” comes from. It was a labor-intensive process, but it was the beginning of something great.

Parsons saw the value in what his team was doing, and he imagined a fully automated machine tool based on this method. He didn’t have the funding to develop it, though. His journey to create this machine took him to the Massachusetts Institute of Technology (MIT) and the Air Force. They built the Air Force Numeric Control and Milling Machine in 1952, and it was a huge success. The machine was programmed by punch tape, though, and not Parsons’ original punch card design. Nothing else existed that could make cuts as fast and as accurate as their machine could. The problem was that the concept of numerical control was so strange to manufacturers that it didn’t catch on quickly. The military eventually built 120 NC machines and leased them to manufacturers to popularize their use.

The Birth of CNC

Numerical Control was a machining marvel when introduced, but its time at the top wouldn’t last long. A study concluded that the biggest flaw with NC was production time shifted from machining to the creation of tapes. The work had a high quality, but it wasn’t done any faster. The time and effort put into the tape’s creation also came with the possibility for production errors; more specifically, human errors. A team at MIT developed a real-time computer and coded many subroutines to put the NC tapes under computer control. With this new system, users could input a list of points and speeds; the program would then calculate and automatically generate the punch tape. This automated process took the time to create a punch from 8 hours to 15 minutes. The Air Force suggested creating a generalized programming language to improve the process. A generalized, universal programming language made it possible for anyone to use the technology. The development of computer aided punch tape led to computerized numeric control. After the pieces were in place, and the cost to produce and buy computers kept falling, CNC began to spread. It eventually became the standard in machine shops around the country.

A CNC milling machine takes a set of coordinates in the form of digitized data to produce a specific part. A computer and CAD program control the movements of the machine. In a mill, the workpiece is stationary, and it does not move at all. The tools move and change, and the work table within the machine can move. Most mills move on the X, Y, and Z axes. The interchanging tools and work speeds are all programmed into the computer. After loading the program, a dry run can make sure it works as intended. The coordinates are changed so that the tools don’t contact the workpiece, and the entire program will run. Once it’s confirmed that the program works, the operator changes the coordinates back and hits start. The machine does the rest. Mills usually work on large square or block-like materials; a lathe, however, creates round shapes.

A lathe works with the same programming language as a mill. It’s programmed the same way, and it uses the same commands and language. A lathe differs in that the workpiece moves, and the tools remain stationary. A workpiece, once loaded into the lathe, spins at a high speed. It’s important to have the material secured properly in the clamps; otherwise, it will not spin true and will wobble. If the piece wobbles, it can ruin the tools and the machine. Once properly loaded, the program will select the desired tool, put it in place, touch the workpiece, and keep it stationary while the material moves back and forth. A lathe generally runs on two axes, the X and Z, and it can’t do the complex work that a mill can. With both machines, the workpiece can need deburring. Diamond coated sand paper can take down any burs and rough edges on a workpiece. These machines can make parts without rough edges, but things happen, and you should take corrective action to deliver a quality machined part.