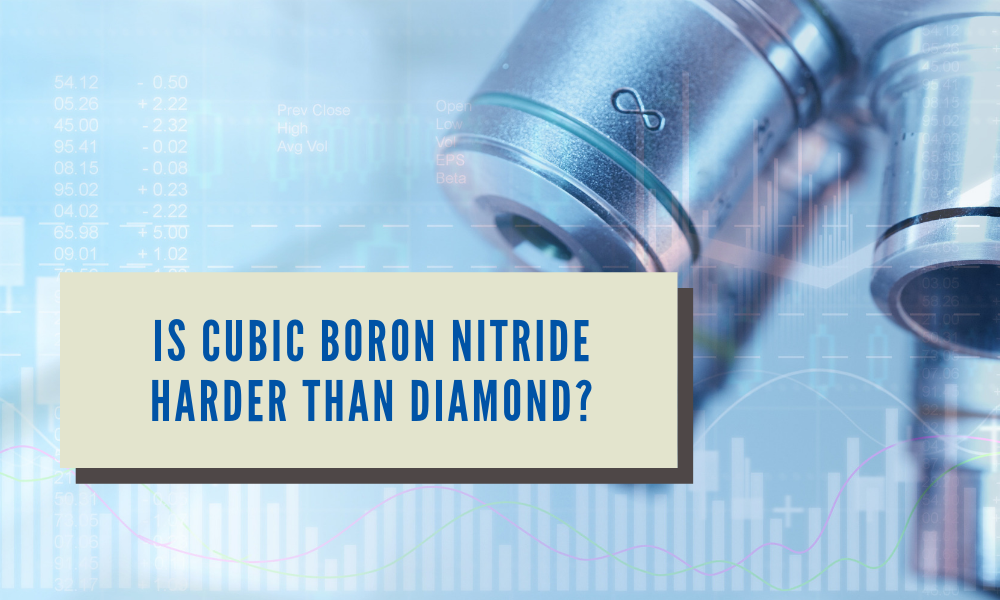 Diamond is the hardest substance on Earth… or so we thought? Many people may not know that this claim became a myth almost sixty years ago. The quest for knowledge and discovery is unending, and thanks to dedicated researchers, they were able to find minerals share very similar properties with diamond.

For example, recently, mineralogist discovered Carmeltazite in Israel, which came as a shock. Many believed that the mineral only existed on the Allende meteorite which landed in 1969. An even more impressive discovery though was that of Cubic Boron Nitride (c-BN). c-BN has similar properties to diamond in that it is extremely hard, durable, and light in composition. However, two huge factors had always set it apart from diamond though; c-BN was man-made in labs and softer than diamond. But would this always be the case?

We dive into the history, composition, and uses of c-BN and look to answer the question on everyone’s mind—is Cubic Boron Nitride harder than diamond?

What Is Cubic Boron Nitride?

Boron nitride is a chemically and thermally heat resistant compound material made by combining boron and nitrogen (chemical formula BN). It occurs in many crystalline forms that are isoelectronic to a similar form of carbon. BN has multiple forms, and the differences lie in their chemical makeup as well as the arrangement of boron and nitrogen atoms. Specifically, the cubic version (c-BN) has similar properties to diamond with superior chemical and thermal stability. According to The Conversation, “In its cubic form (c-BN) shares the same crystalline structure as diamond, but instead of carbon atoms is made up of alternately-bonded atoms of boron and nitrogen.”

In 1955, Robert H. Wentorf Jr. and his team at General Electric Research Laboratories made the first synthetic diamonds. The project was top secret and something scientists had been trying to achieve ever since they discovered diamonds came from carbon. Wentorf and his team’s process included applying high pressure to pure graphite. This work laid the foundation for him to eventually invent Cubic Boron Nitride, or Borazon, in 1957. No one could have predicted that these minuscule particles would later become today’s super abrasives.

From that point on, mineralogist believed that c-BN was completely man-made and did not exist in nature. However, in 2009, Geologists from UC Riverside, along with counterparts from Germany and China, discovered naturally occurring c-BN in Tibet. The southern Tibetan mountains of China held the secret in the chromium-rich rocks of the paleo oceanic crust.

The UC Riverside geologist did not receive credit for their discovery until 2013 when the International Mineralogical Association finally announced the news. Researchers would now call the naturally occurring mineral Qingsongite. It is named after famed Chinese geologist Qingsongite Fang—he was the first to discover diamond in that region of Tibet in 1970s.

Up to this point, the world’s understanding of c-BN was consistently changing. From man-made to naturally occurring, it was hard to nail down this mineral. Around the same time of the announcement about naturally occurring c-BN, there was another major revelation. A team of scientists from America and China unveiled their research in which they compressed c-BN into a better, ultrahard version that was more durable than diamond.

The scientists started with “onion-like boron nitride particles shaped a bit like a flaky rose.” They then compressed them to 15 GPa; this caused the crystals to reorganize in a Nanotwinned structure. In this new structure, neighboring atoms share a wall—very similar to how adjoining apartments are set up. And like these apartments, some of the atoms mirror each other. The Nano twinning allowed the team to decrease the size of the c-BN to 4 Nm without weakening the new particle. In turn, it actually made the particles harder to puncture, stronger, and more stable at high temperatures.

The making of Cubic Boron Nitride is very similar to that of artificial diamonds. Manufacturers use a process called sintering, or frittage. Simply put, sintering involves adding heat to the mineral in order to impart strength and integrity. Boron Nitride (in its hexagonal form, h-BN) goes under high heat and pressure, without hitting the melting point, to create a solid mass. From here, the manufacturer will add a catalyst such as lithium or magnesium to reduce the pressures and temperatures needed for the conversion. With this process so readily available, industries began using it to make abrasives and tools—producers create tons of c-BN every year to meet the demand.

The atoms of c-BN are very light and very robust—mechanically and chemically, it is a very popular material. The most common use for c-BN is as an industrial abrasive. The similar properties it shares with diamond, and the fact that it is easier to find and produce, make this application logical. Since it will not dissolve or turn to liquid at high temperatures, it is also easy to use with iron, nickel, and similar metals.

Diamond, however, is soluble with these metals and would liquify at a lower temperature than c-BN—this leads to the breakdown of the grinding wheel, which is a necessary part of the process. If the grinding wheel is damaged, it can lead to burning and poor glazing or finish on the workpiece.

Specifically, the aviation industry and turbine manufacturers use electroplated precision grinding wheels to grind turbine blades and other engine components. They are best suited for close tolerance grinding that requires close stock removal of nickel alloys, cobalt alloys, and other hard materials. A wide variety of scratch resistant surfaces, cutting tools, and drill bits have c-BN in their make up as well.

To recap, after a breakthrough discovery in 1957, researchers clarified that diamond is the hardest natural substance on Earth. But that did not remain true for long. Today, we refer to diamond as the hardest naturally occurringsubstance on Earth. This means that there is nothing on Earth that occurs in nature, unaltered by man, harder than a diamond.